Week 9: How many are in there?

So I'm getting too big too early to hide this secret any longer, but I've never really liked secrets anyway.... 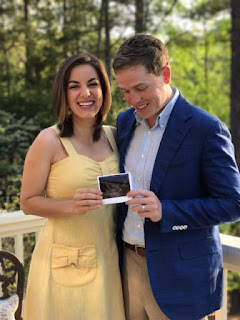 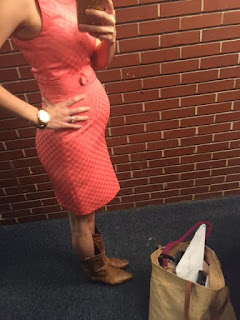 The good news, there's only one in there. I was pretty convinced between my ravenous appetite and bulging belly that I was having a litter until the sonogram. And let me tell you about this sonogram... 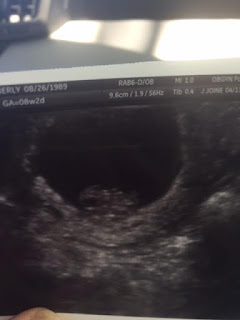 I knew I was going to be nervous to make sure everything was okay, but pregnancy hormones and emotions decided to make this a 'next level' experience. The poor sonogram tech didn't know what she was getting into.

As soon as I laid down on that table in a dark room, the flash backs to the last time I was in that position were all a little too real. Instant waterworks. And hearing the words, "Everything looks good! There's only one in there. Here's the head, arm buds...heart beat.Heart beat looks strong..." As much as I've reasoned with myself that it's all going to be okay, or that it's okay if it's not all okay, whatever Psychology 101 I've decided to dose myself with that week, I just wasn't prepared. I couldn't get a grip. Ugly sobs.

My husband asked if they were happy tears. My first instinct was to say, yes, the absolute happiest of tears! But, along with salt water and hormones there was so much fear, uncertainty, relief, and hope in those tears, I feel like it wouldn't do them justice to call them 'happy tears.'

But along with uncontrollable emotions, heartburn, and constant nausea, Holy. Exhaustion.

Remember the Secret World of Alex Mack? For those of you NOT raised in the 90's, this girl nearly gets hit by a Mack truck full of chemicals and somehow, is able to turn into a Capri-Sun package looking puddle of goo and slide around and then morph back into herself when she feels like it. (It was the 90s, just go with it...)

Well, that's the best comparison I can give you for how I feel right now. The only difference is it feels like the truck DID hit me, and the only place I slide when I feel like that puddle of goo is into my bed.

I was tired the last time around, but this is next level. The timing probably isn't helping anything. Last week was our busiest week of the year at work...Masters week. And, this year, we got a double dose with two separate days of tornado-spawning severe weather tacked on.

I once came into work with a kidney infection and bronchitis, but I was so tired, nauseous and capri-sun-puddley on Tuesday, I took a half day. THAT is the level of exhaustion I'm talking about.

Thursday...I woke up after 8 hours of sleep to go to the gym. Realized it was just too daunting. Snoozed for another 30. Went to the gym. Left after 45 minutes because I was too tired. Showered. Napped...because showers are exhausting. Went to a board meeting. Came home. Napped for an hour and a half. Drug myself to work...still exhausted. Napped for 30 more minutes on my dinner break. And, I was still tired when my head finally hit the bed.

But, I promised myself I would appreciate the 'process' of pregnancy more this time around, so that's enough whining...at least for this one blog post.

Which means I'm out of things to say.

But, did I mention? We're pregnant! There aren't enough words in the English language to express how thankful I am. All-day sickness, exhaustion, weight gain, and all. I'll take it.
Posted by Laura at 12:50 PM 3 comments:

Week 4: Bug on a windshield

I want to shout this and whisper it at the exact same time.....we're pregnant!

So, I'm basically doing this strange dance of being so grateful and thankful and excited, while at the same time, trying to convince myself it's no big deal.

The best comparison I have is a really bad, soul crushing break up. Then, a little time goes by, and you get up the courage to have a crush on someone else, but you're terrified to fall in love again for fear of getting crushed like a bug on a windshield.

Meet me. The bug.

It's been a while since I wrote a blog post. And, a good bit has happened. For one, we got test results back that told me I have a pretty common gene mutation called MTHFR (yeah, that's exactly what I said when I heard about it...with a few more vowels.) (Some estimates say 40-60% of the population may have it). If I went into the science of it, your eyes would surely glaze over. Because mine have. Several times.

But in lay man's terms, it means my body can't process folic acid properly. So, even though I was taking it every day, my baby was getting very little, if any of it.

So the good news, we have a thing that I can point to and say, okay. We can fix this. I just take a prenatal vitamin with the form of folic acid that's already broken down and a couple of folic acid supplements a day, and voila!

Now, my doctor can't point to this and say 100% this is what caused me to have such a late miscarriage. But, it's a strong possibility, and also helps my sanity to have something to *fix*, to do differently than the last time.

​One thing I hate, is the innocence is gone for me. The innocence of that first pregnancy, the hope that everything will be alright...that's gone. And in it's place is a lot of prayers, an abundance of caution, and a constant tennis match of logic going on in my head.

And, I do not like 'worry-wart' Laura. I much prefer care-free, spontaneous, kick your shoes off Laura.

A day or two after we got the first positive pregnancy test, Austin was asking me how I was feeling. I responded honestly...excited, but trying not to be too excited quite yet. He  was like, well, I totally get that. But, are you going to not be excited until after first trimester? But we made it past that the last time....so 18 weeks? Until the baby is born? Then for the rest of its life, because something bad could always happen?

And $h!t! He's right. He's so right. And not just about this baby, but about anything in life. Something bad could always happen. But, waiting on the other shoe to drop isn't any way to live a life. So, I guess I'm just going to go all in.

I'm not going to make any hard and fast rules, because I know some days I'm going to be as nervous as my Meme in a thunderstorm, and look up every terrible scenario ever typed into the Google search bar. But, I'm excited. And, I'M PREGNANT!!! I have no idea what's going to happen tomorrow or 6 months from now or 10 years down the road, but life is too short to just dip a toe in the water.